The seventh Take Back Your Health Conference began this morning in Arlington, Virginia with keynote speaker Joel Salatin of Polyface Farms.  What follows is a recap of Joel Salatin’s keynote remarks.

I’ve attempted here an abbreviated version of his remarks told in his voice, as I heard it. Not everything is captured, but Joel is so inspiring, I wanted to share immediately! 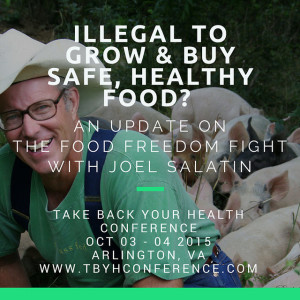 “Every culture has had its own orthodoxy. Consider past – and even current – acceptance of slavery. Or abuse of women. How about a time when women’s suffrage was considered silly. The orthodoxy was: why would women want to vote?

What about the orthodoxy that lard & butter are bad and hydrogenated oils are healthy?

Now that seems like a blip – those people are now saying there is NO safe level of hydrogenated oil.

The USDA used to be teaching farmers how to feed dead cows to cattle. Farmers like us who didn’t buy into that were branded as luddites, anti-science. Now 30 years later we’re realizing oops, we shouldn’t have done that.

My question is: a hundred yrs from now as we laugh about the orthodoxy of our day, I wonder what our descendants will look back on and laugh thinking, ‘man, were they nuts.’

This orthodoxy defines the entire system and creates a de facto inquisition against the heresy. We don’t burn at the stake today; we just surround with SWAT teams and do food raids, blue collar inquisition from insurance. There are government, legal, de facto and business kind of things that preclude the heretical from accessing the market.

One key idea of this orthodoxy is: Food is dirty.

The production phase of food is dirty, so we don’t want it around people. It’s okay to have a dog & cat but 2 chickens in your yard, that’s agriculture. Forget that dogs make 11 times more manure than chickens and it’s more toxic.

It’s as though we want to “levitate ourselves away from dirty production” – a food segregation orthodoxy. Not integrated. We have exchanged racial segregation for economic, insurance, food segregation. A fraternity of ideology – good production is not something you can bring into the urban structure. Look at home owners associations that criminalize gardens, chickens, clotheslines. Listen: good food should be integrated in our lives.

There’s the idea that sophisticated people don’t cook. Actually slicing and sauteeing is for people who don’t have a good salary.

I’m still emotionally damaged from high school guidance counselor who almost had an apoplectic seizure that I would waste my brains and not become a professional. We have this condescending spirit in our culture. Perhaps 100 years from now we will laugh at this condescending spirit and at those 71 million acres of recreational lawn and horses land.

What better role model could you ask for teenagers than chicken? They are the first up (before cows, then pigs). They spend all day pecking around eating bugs, turning trash into treasure – bugs, maggots – then lay a couple of eggs for you. And as soon as sun goes down – they go to sleep. 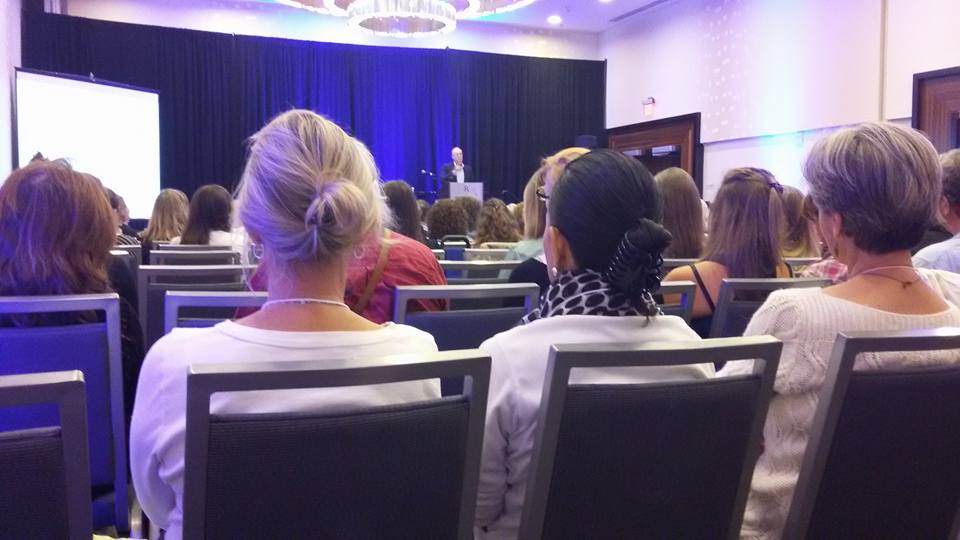 Food and animals are not mechanical. They are biological.

If a bearing goes out in your car, you can put grease on it. Machines don’t heal.

The process to turn meat into baloney or other products is manufacturing. Not farming. On our farm, it’s illegal for us to have a woodworking shop. We have walnut & prime woods. We have a sawmill but we can’t mill a neighbor’s log even though mine is 800 lbs and smaller than most people’s waterski boat. Growing tree is farming, but turning into a table or a toy is illegal. I know someone who had to sue the easement holder in order to be able to bottle milk to sell to neighbor. To enter the conventional food system, there is a labyrinth.

There is the assumption that without a stamp of approval, food is not safe to eat. One of the orthodoxies today is: in order to be safe, food must be sterile.

You can feed your kids Mountain Dew, but raw milk is unsafe. Now there is getting to be zero tolerance for artisanal cheese. The truth is we want bacteria. 95% is good. Sterile cheese is like Velveeta. Cheese that gives us life should be left out on a table. If it won’t rot, it won’t digest. But the orthodoxy is that you eat sterile, unrottable food and then you fall apart at 12 or 13, then get pharmaceuticals involved. Our question if an animal gets sick is: what did we do to immunological terrain to let the cow get sick?

What we’ve got today is this assumption that people are too stupid to take control of their own food choices. We’ve got three trillion members in our internal community – there is all sorts of stuff going on. Our bacteria are talking to each other: ‘I’ll trade you a starch for a protein.’ We have three bacterial guardians around every single one of our cells. MIT says we are only 15% human – we are just physical manifestation of bacteria & genes. But the orthodoxy of our day is that we are far more mechanical than we are living.

So what are we looking for? A time when the freedom and liberty to choose our food is as fundamental to freedom of speech, assemble, worship. The only reason our founders didn’t give us the freedom to choose our food bc they couldn’t have imagined the day that if I had extra I could not have made a pot pie and sell to a neighbor. Can give to a neighbor – considered a patriotic American. If that neighbor then asks to buy one – nope, can’t do that. It’s not about safety. It’s about carefully regulating what is acceptable in the marketplace.

If we grow our own food, we don’t support businesses and the industrial economy.

I hope for day when group of soccer moms cheers when one says her child wants to be a farmer.

Things we believe or want, not the current orthodoxy:

A lot of the things I have touched on are the reasons why local food is expensive. Because when you squeeze local food that is small throuogh this industrial orthodoxies, you make it expensive. Costs $8 for us to process a pound of bacon – that’s why sell $15

If you’re new to this, the idea of being a heretic can be intimidating. But you don’t have to think you will get it all right. Imagine you’re at Thanksgiving. There’s a new baby crawling on floor who pulls up for the first time. She falls down. No one tells her she didn’t do it right. They know she’s going to fall.

For more information on the Take Back Your Health Conference, which runs through Sunday, see our At-A-Glance post. This evening will feature the premiere of the new documentary Revolution: Food, which also features Joel Salatin. 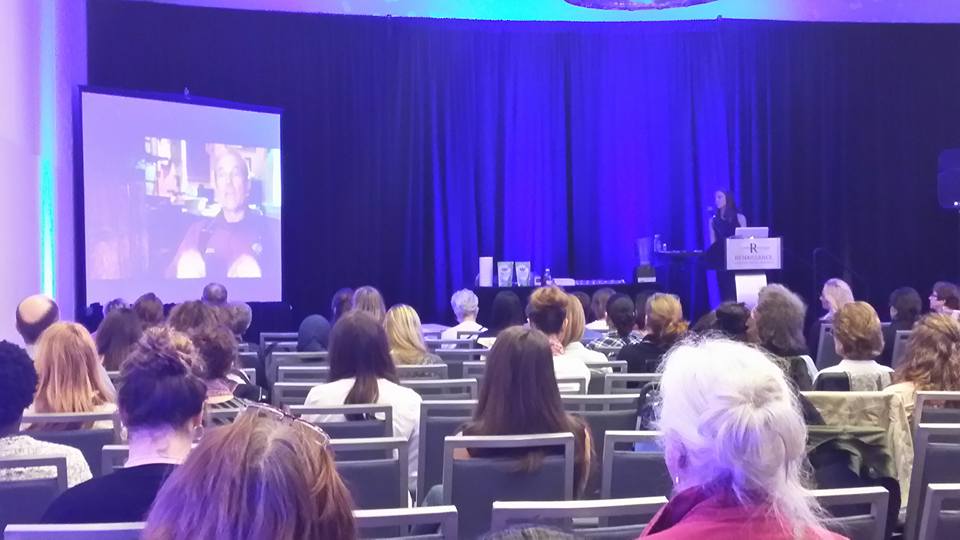 Jessica Claire Haney is the founder, publisher and editor of Mindful Healthy Life. She is a co-leader for the Arlington/Alexandria chapter of Holistic Moms Network. Her personal blog is Crunchy-Chewy Mama. See the Contributors page for more on Jessica.

Mindful Healthy Life is a media partner of the Take Back Your Health Conference. This page has affiliate links.