Tamara Rubin of Lead Safe Mama traveled to the East Coast recently to educate people on how to choose safe products for their homes. Having followed her blog for a while and been astonished at some of her findings when she’s tested vintage and new dishes, toys, jewelry and more, I organized a testing party so I could have some of my items tested.

Eight of us came together to have three hours with Tamara during which she shared her story as an advocate and a mom of four, three of whom got lead-poisoned during a home renovation in Portland, Oregon. She talked about trends she’s seen in her years of testing items with an XRF machine and then used the machine to test items we brought to the table. Tamara used a Nikon XL32 XRF machine in consumer goods mode.

Anything with over 90 parts per million (ppm) of lead is considered unsafe for children, so we were all hoping our items would be under that threshold, if they had lead at all. But Tamara’s instrument also detected cadmium, a known carcinogen, and antimony, which has been shown to cause cancer in rats, as well as mercury, arsenic and other metals.

Tamara explained a lot as she went, sharing some of the powerful information she has gained over her many years of advocacy with us while we waited for her machine to analyze each piece. 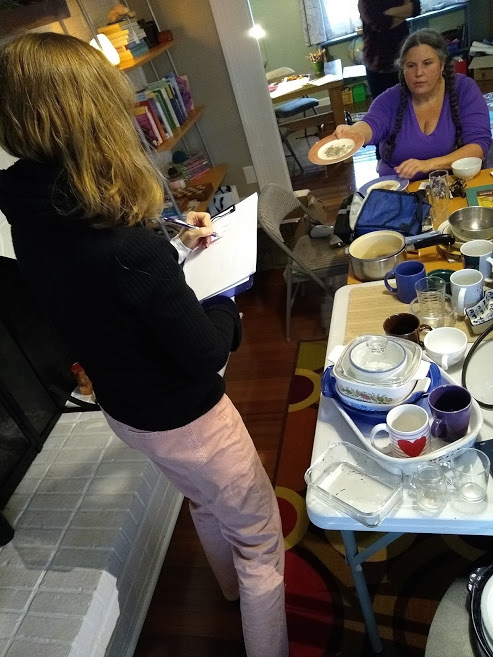 One mom brought a Moscow mule mug whose interior was safe but the handle was not. Tamara explained that leaded brass allows for transference more than other metals. Also, the solder holding the handle to the mug is often leaded. 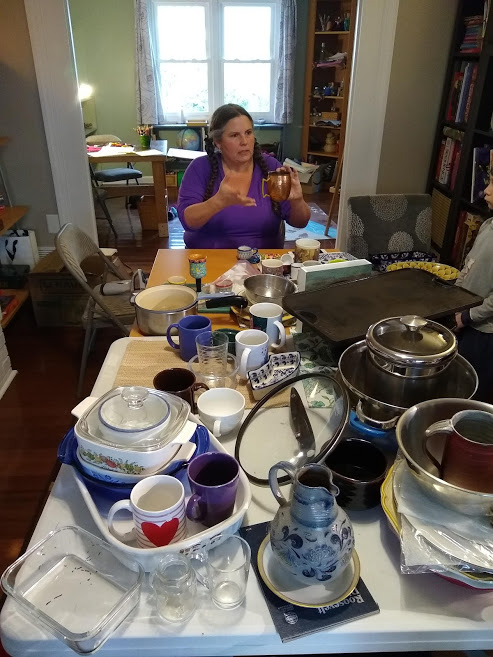 As one mom’s colorful pottery came up with tens of thousands ppm lead, Tamara explained that pottery made in Mexico, Portugal, Spain and India often comes up high in lead, more so than items from China where some regulations are better. Two items from Ten Thousand Villages were fine.

An ice cream scoop of what Tamara called “pot metal” came up with 709 ppm lead. Tamara explained that items from that kind of metal are almost always going to have lead. 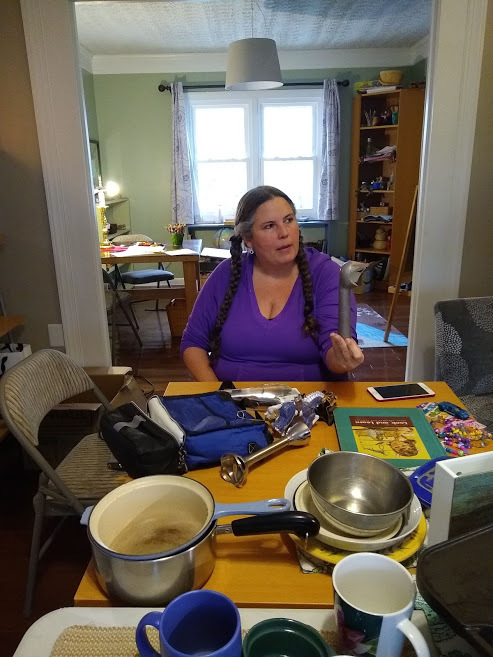 I had worried that the event might cause me to be more fearful, but it was actually really helpful. I learned a lot and was pleased that most of my items came up pretty clean. I will replace a white baking dish that had 105 ppm lead with a clear Pyrex dish. (The red lettering on Pyrex measuring cups has shown to have lead, but Tamara cooks in clear Pyrex often). My Revere Ware pot, in which I daily heat broth and cook so much else, was also fine. Phew!

However, the cheery yellow “Brittany” style plates I received for my 2002 wedding came up with more than 20,000 ppm lead. 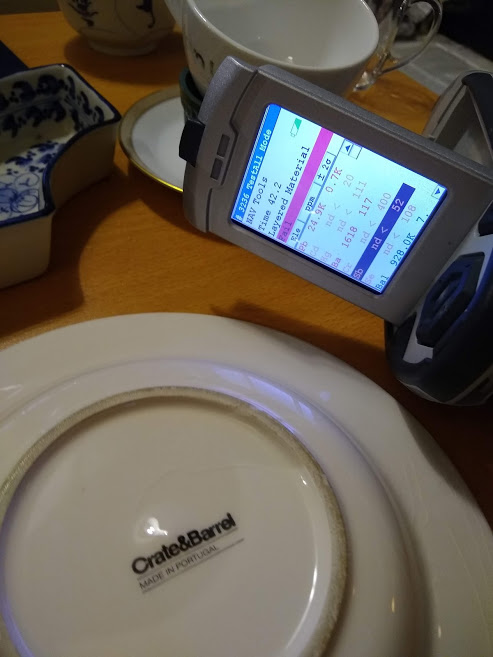 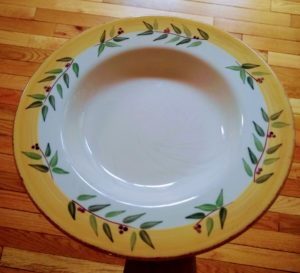 Tamara noted having found many problematic items from this brand. Tamara has also consistently found problems with dishes from Mikasa and Emile Henry.

I will probably also replace the white World Market bowls that came up with arsenic. Another mom brought an inexpensive World Market glass, which was fine. Tamara said less expensive stuff is often safer. She has tested Waterford crystal to have 300,000+ ppm lead and has rarely tested a lead-free Le Creuset item. My old pot was one of the few that passed!

It was nice to hear, “You’ve made good choices!” 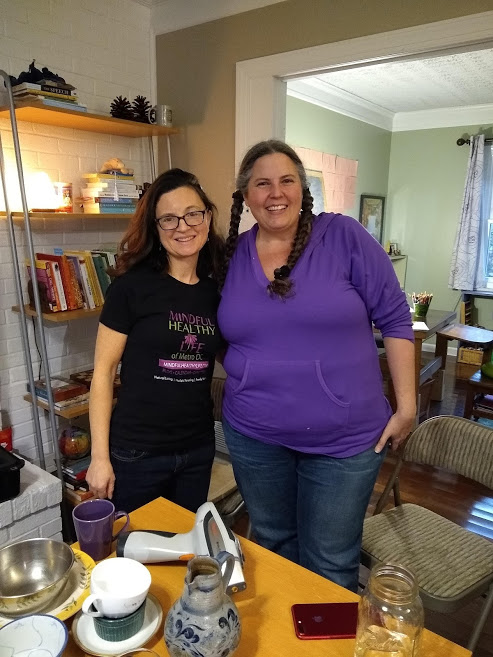 However, I know a lot is due to luck. One of the most notable finds was an Xtrema pot belonging to the host. Having received test results that showed she had a problem with metals, the host specifically purchased Xtrema because the brand claims to be an alternative to metal. While we waited for the host’s pot results, Tamara explained she has previously tested other Xtrema pots and found them to contain 14 metals. They don’t contain significant amounts of lead on the surfaces that touch food (compared to 6000 ppm on the label), but they do have high cadmium. This one came up with 694 ppm cadmium on the lid. 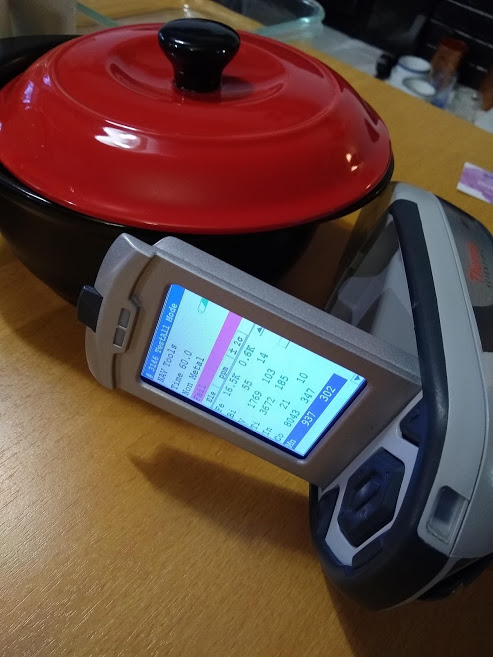 Tamara said that stainless steel is usually pretty safe from lead and that it’s not likely to contain aluminum, as one mom thought, because they have different melting points. Revere Ware is usually safe. She noted that IKEA’s stainless steel also has no nickel, which can be an allergen for some people. Tamara said most items carried in Target are lead-free or lead safe.

I had brought a hoodie from Old Navy to test the zipper, but Tamara said the chain had an issue years ago and has rectified it. 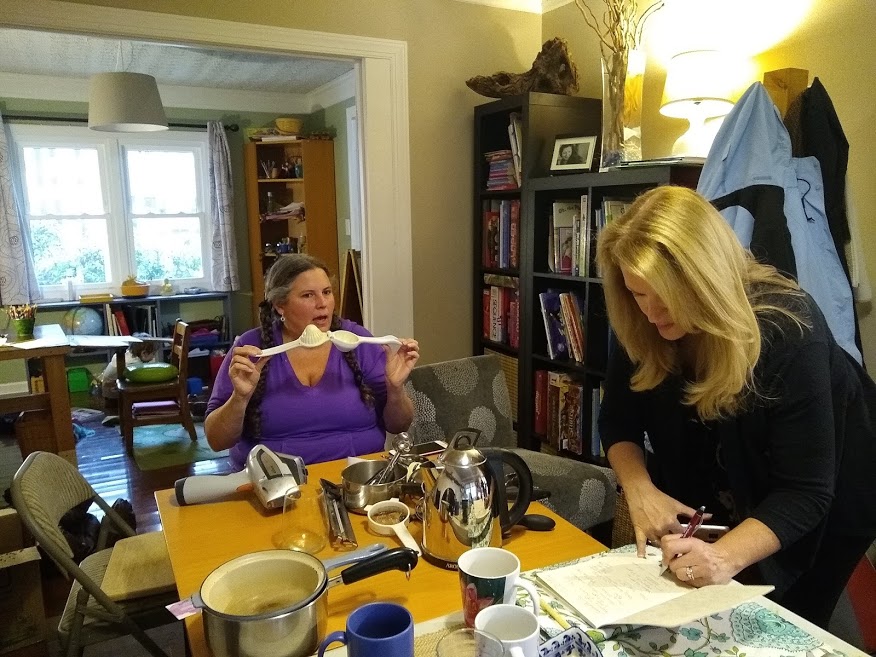 As Tamara shared her experiences – with her family and with countless others she’s counseled – we all had new revelations about items we wished we’d brought. I’m making a list for next time!

Tamara is planning to return to the DC area for an event on April 4 and may schedule testing parties on either side of that. Be sure to bookmark Tamara’s website, TamaraRubin.com and follow Lead Safe Mama on Facebook. Stay updated on her travels to the DC area by joining her private local Facebook groups: DC Lead Safe Mamas and Virginia Lead Safe Mamas. 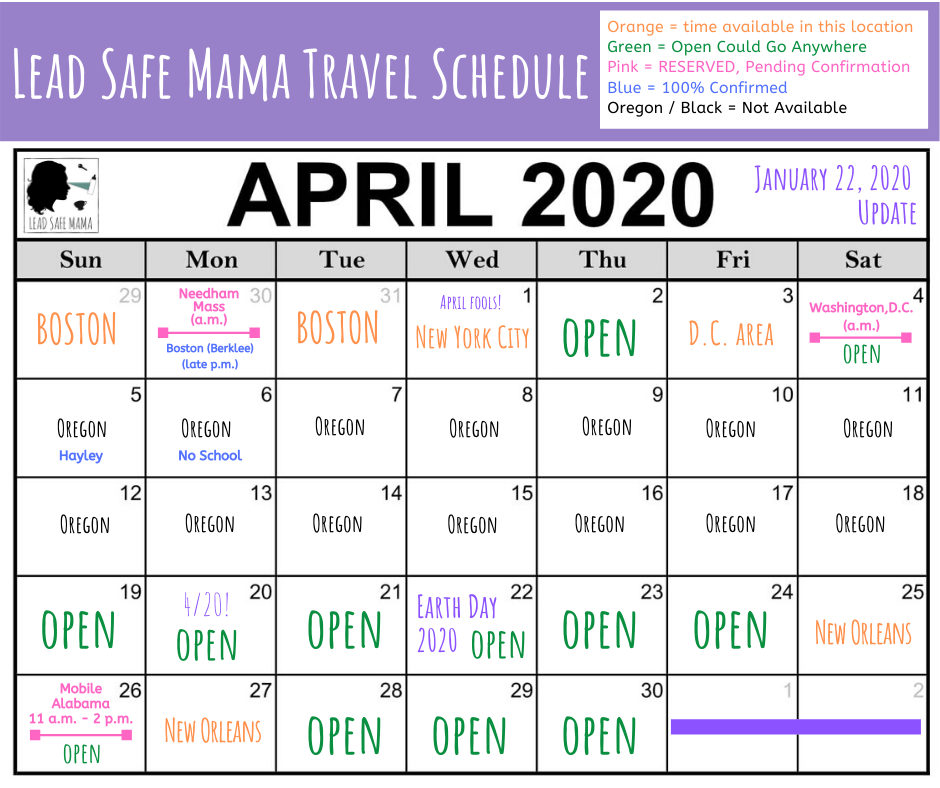 I’m not sure if I’ll be helping to organize or just attend another testing party, but I would love to bring jewelry, more pottery and art. I plan to spend more time looking at Tamara’s site and encourage anyone who’s concerned about their health to do so as well. She’s done a lot of terrific work and we can all benefit from her findings.

Also be sure to check out her film, MisLEAD: America’s Secret Epidemic.

Although it initially seemed like $150 was a lot to spend on 30 minutes of testing, it now feels like a bargain. Sending out individual items would cost way more and not include all the information we got from Tamara. It was hugely valuable to spend over three hours with an expert. I learned so much from watching everyone else’s items get tested, and the camaraderie of the group was another bonus!

If you’re interested in an early April party, contact Tamara through one of the groups or go ahead and email me at jessica (at) mindfulhealthylife (dot) com. I hope we can make it happen again!

Jessica Claire Haney is the founder, publisher and editor of Mindful Healthy Life and the author of its Guide to Holistic Family Living in Metro DC. A mother of two, Jessica founded the Arlington/Alexandria Chapter of Holistic Moms Network and volunteers on school wellness issues. Follow on Facebook at MindfulHealthyLife, on @Twitter @MindfulHealthy and on Instagram at @mindfulhealthy. A writer seeking representation for her first novel, Jessica offers writing, editing, and consulting services. Learn more at JessicaClaireHaney.com. Jessica’s personal blog is Crunchy-Chewy Mama, on Facebook at CrunchyChewyMama, Instagram at @jessicalclairehaney and on Twitter @CrunchyChewy.