The non-profit organization really outdid itself with a wide array of activities and entertainment for all ages, as we’d described in our preview post.

There was hula hooping with Sirkus Dayz, 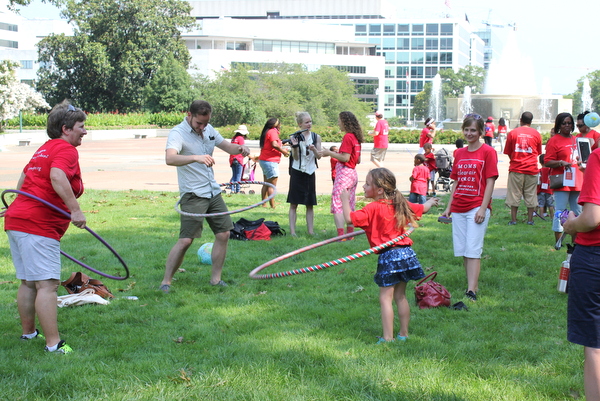 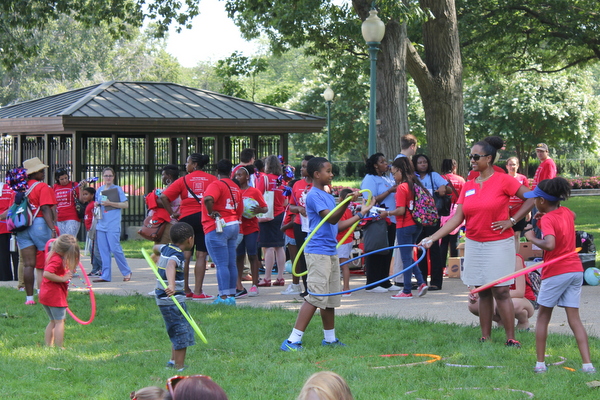 and sign-making with art supplies donated by SCRAP DC. 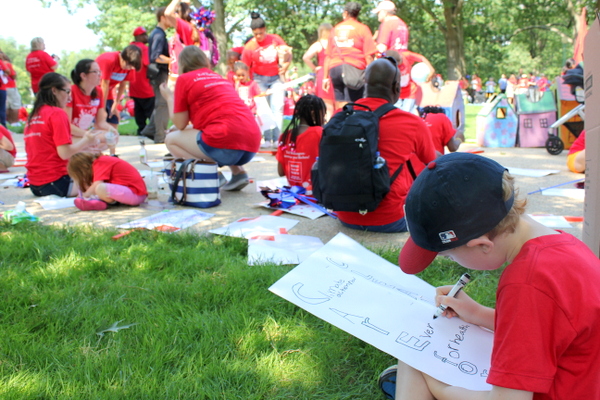 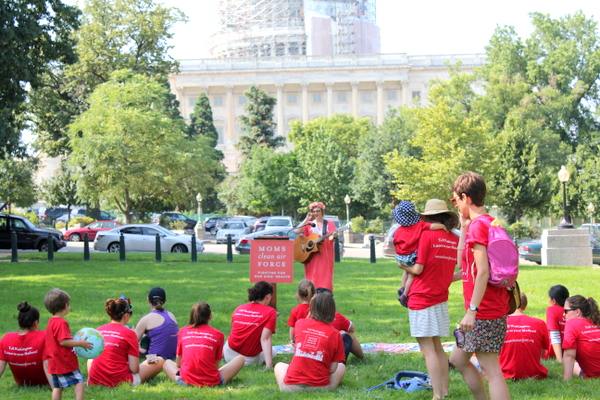 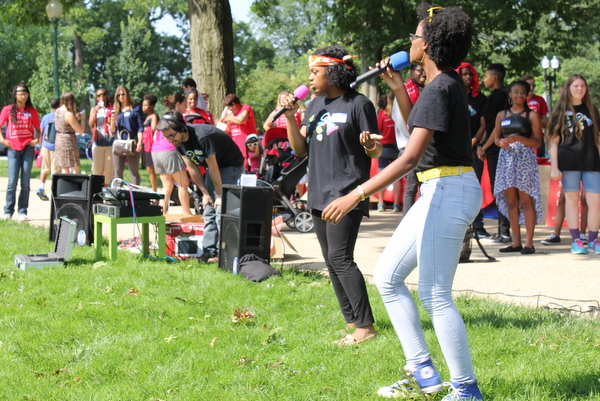 and Baba Ras D, who called on the crowd to “pass the peace” and to remember that “peace begins with me.” 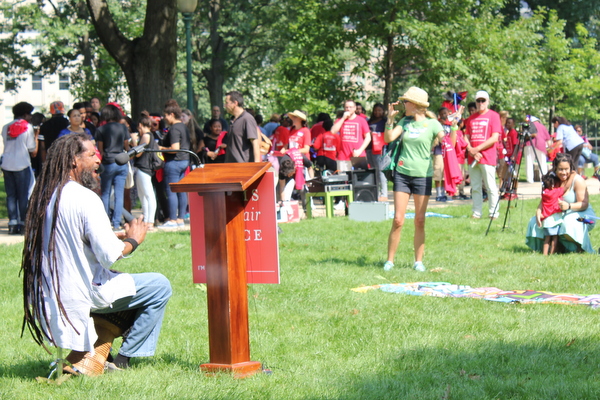 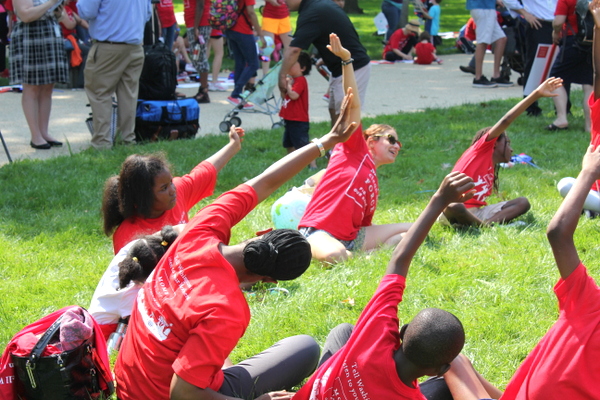 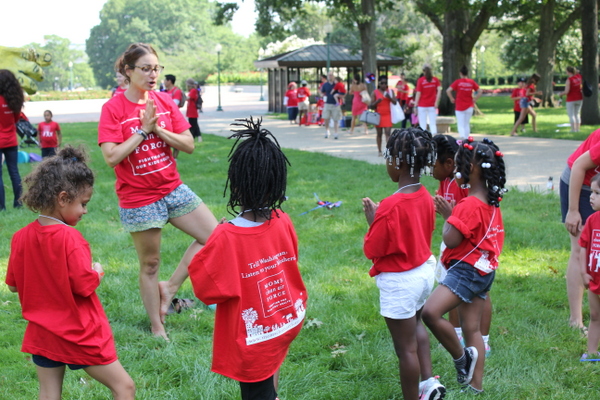 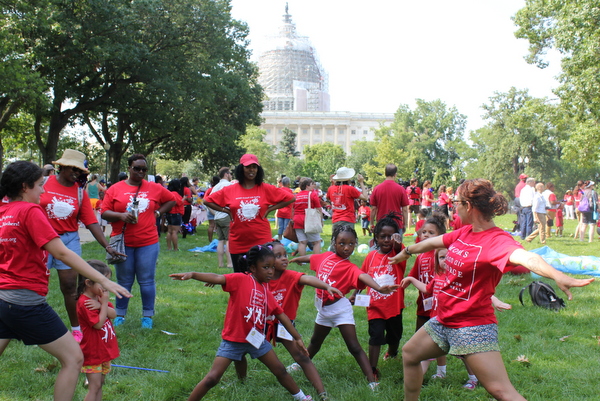 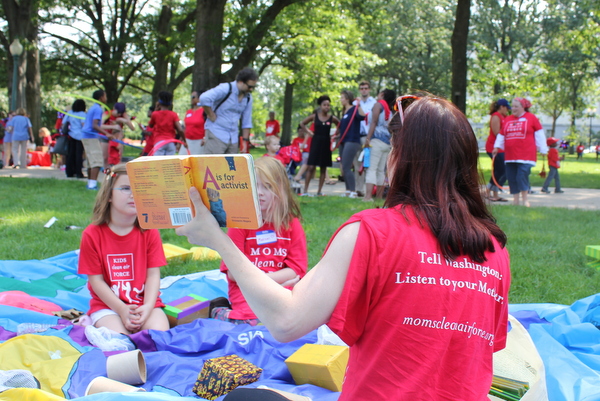 and children of all ages delighted in parachute play. 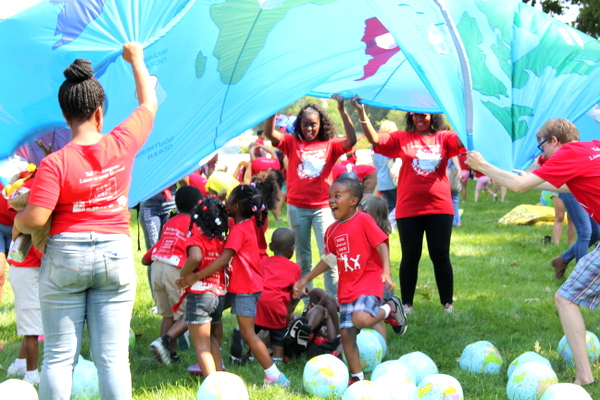 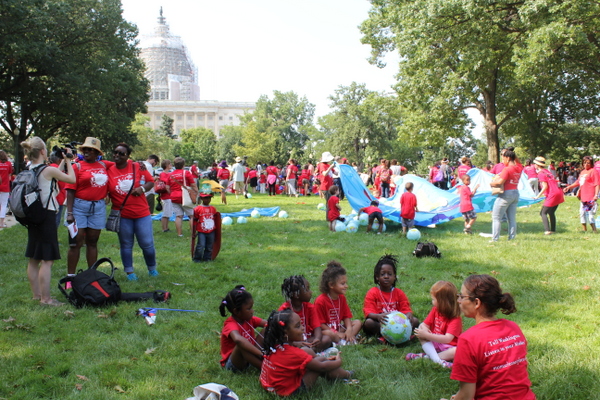 Puppet play and costumes were furnished by Spiral Q. 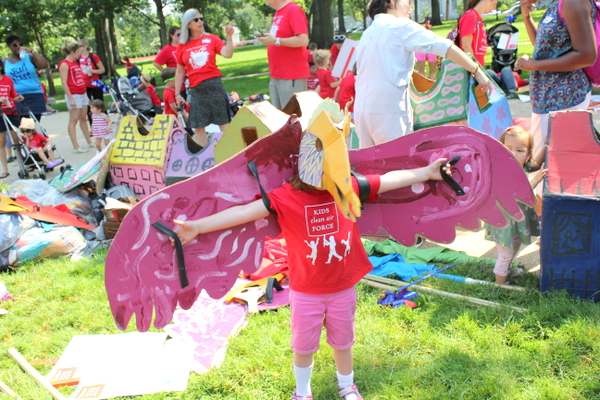 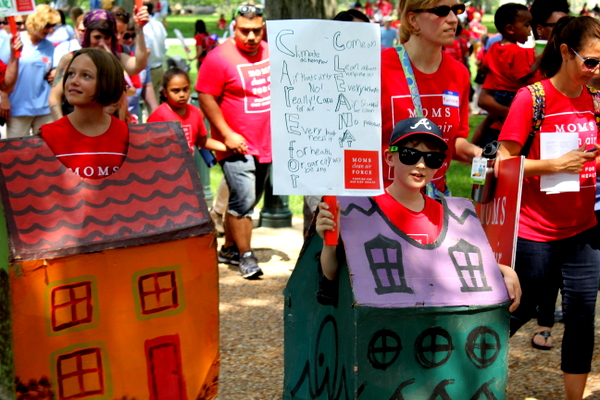 After hearing an original spoken word poem from Osa Obaseki, who leads the performance team at The Sanctuaries, the press conference started. Moms Clean Air Force director Dominique Browning declared that “Love is stronger than pollution.” 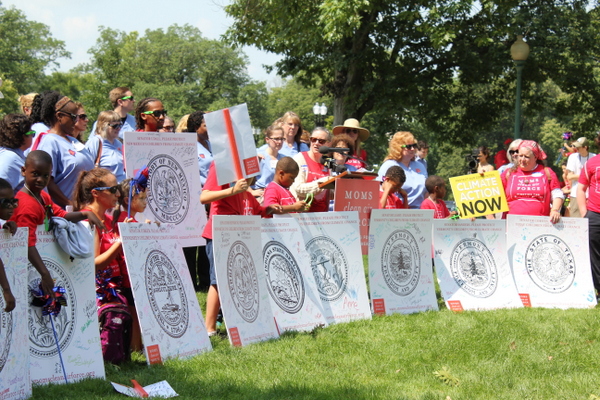 Reverend Gerald Durley told the crowd, “We are the face of change!” 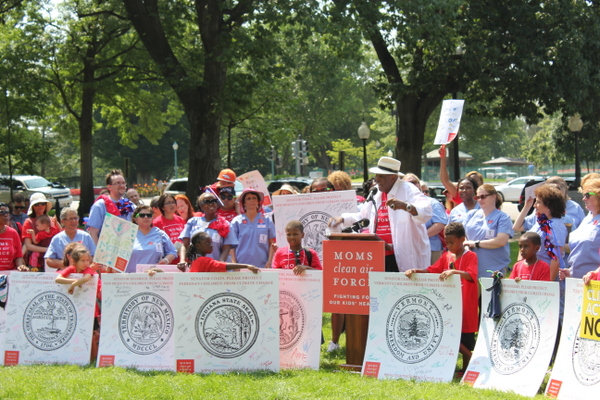 Blogger Laura Burns was brought to tears sharing how much she wanted to be a soccer mom but climate change with longer pollen seasons has robbed children of the simple pleasures of playing outside. 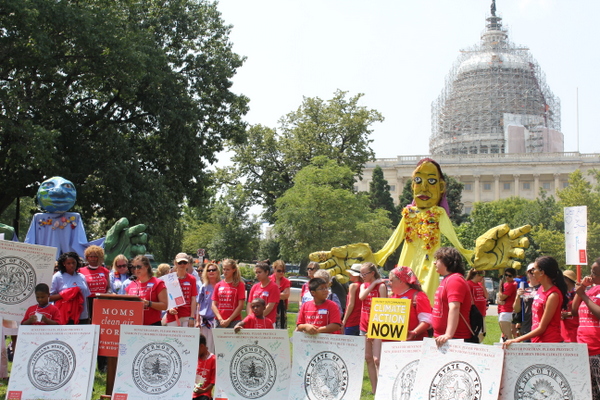 Reverend Dr. Yvette Griffin of Detroit shared that her 13-year-old granddaughter Ariana had a severe asthma attack that, despite medication, landed her into a coma for a year and a half before she went into cardiac arrest and died. 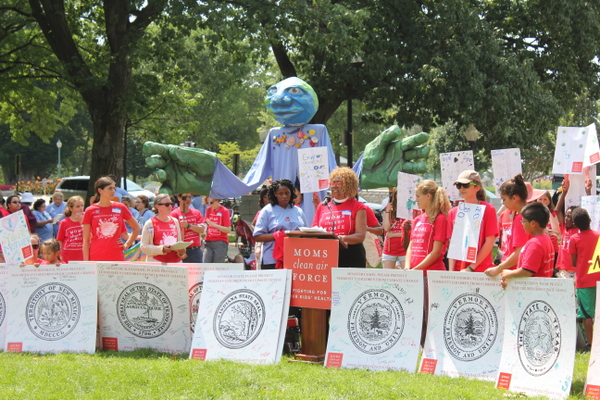 She called for support for America’s Clean Power Plan and updated smog standards. She called on participants to tell elected officials to protect our children. Caring for people and caring for the environment not mutually exclusive; they are the same thing. “This is a matter of life or death,” she said.

After the press conference, attendees marched to the Capitol. 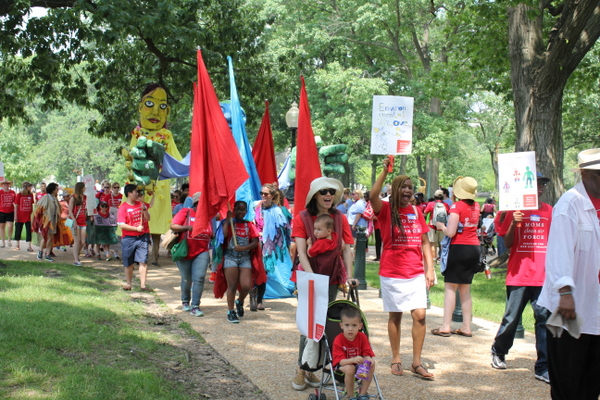 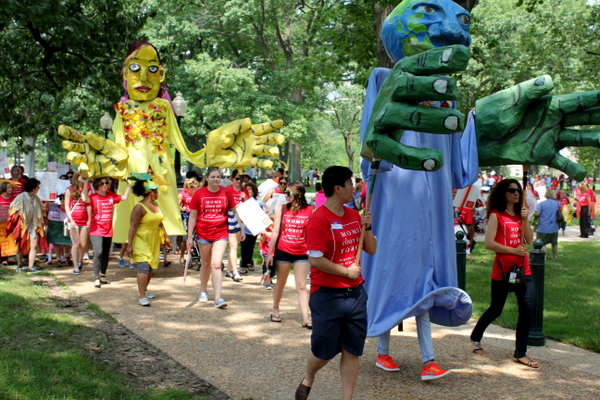 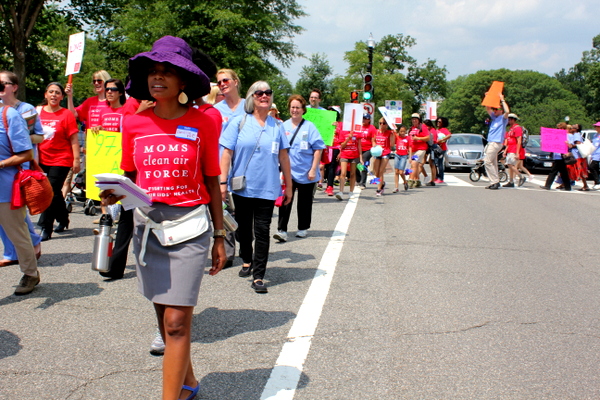 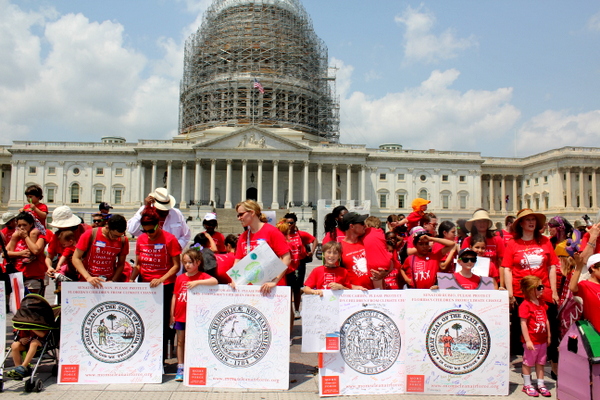 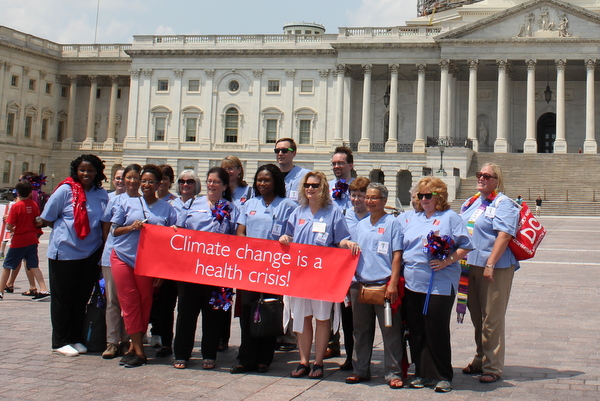 Groups of attendees then met with members of Congress in their offices.

The event was certainly worth changing my travel plans to attend! My children got the chance to hear about important issues and to put their health into the context of the health of the planet. I hope when they are older and we don’t have time constraints, they can join to lobby U.S. members of Congress like we did Virginia legislators at the Virginia Mama Summit, one of 15 Mama Summits held this spring by Moms Clean Air Force.

For more coverage of the play-in, see the Moms Clean Air Force website and the organization’s Facebook page.

Click here to listen to audio of the press conference

« Living without dairy, but not without ice cream!
Wonder-Days this summer at Potomac Crescent Waldorf School »
Follow on Instagram
Tweets by @@MindfulHealthy