Jennifer Robins of the popular Predominantly Paleo blog is an Arlington mom of three who has been pursuing a grain-free path to healing since she was diagnosed with Hashimoto’s thyroiditis after the birth of her second child in 2008. Then, she began following a “primal” diet that included dairy. But after continued symptoms, she got clear in 2011 that she needed to ditch the dairy.

Jennifer generously offered to share her story from her blog with Mindful Healthy Life readers below. For anyone who thinks a dairy-free summer means an ice cream-free summer, be sure to check out her beautiful non-dairy ice cream e-book on sale for just $6.99 through Monday, July 6.

We All Scream for Ice Cream 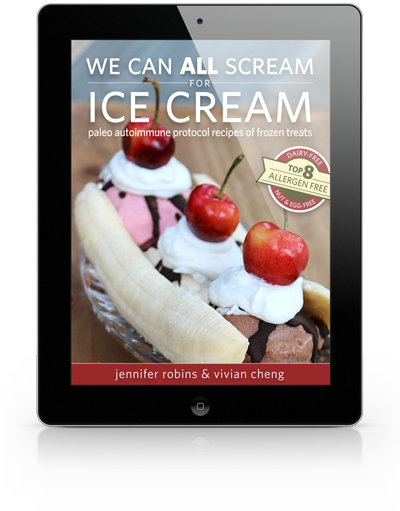 , co-authored by nutritionist Vivien Cheng, is gorgeous and includes recipes that not only omit dairy but also are free of egg and nut for those following the autoimmune paleo protocol (AIP). So the book is well suited for vegans and anyone who can tolerate coconut milk and maple syrup, the key ingredients in most of the recipes.

Let’s hear how Jennifer made the transition to dairy-free and why she will never go back!

WHY I QUIT DAIRY + CAN’T EVER GO BACK! by Jennifer Robins of Predominantly Paleo

I come from a dairy loving family to say the least. We followed “doctor’s orders” and had a glass of milk on the dinner table every night growing up.  To this day my dad still drinks at least a glass a night of skim milk because “it’s the best choice.” It’s not even an argument I want to get into there – pick your battles as they say!

In addition to our daily milk glass, I have always been a cheese lover…and when I say cheese lover, I mean addict.  In my mind every meal should have it in one form or another. And being a 4th generation Texan, Tex-Mex is the very source of cheesy inspiration I could have survived on for the rest of my life. Except I can’t. In fact, dairy was playing its role in killing me.

I realize this is a rather bold statement and really sounds dramatic to be honest. But it’s true.  Nobody could have loved the stuff more than I did, but as time went on I saw the writing on the wall – the wall being my inflamed brain.

After baby #3, born in 2011, my health crisis hit hard. As the months of illness wore on, I had a list of over 50 symptoms I had journaled, all seemingly unrelated, but I knew better.  I had seen cardiologists, nephrologists, general practitioners, neurologists, chiropractors, acupuncturists, herbalists, ortho molecular doctors, western docs, integrative physicians, and 3 lyme docs. I have taken about every combination of oral antibiotics, anti-parasitics, anti-fungals, anti-virals, vitamins, minerals, homeopathics, herbals, superfoods, essential oils, and so on. In fact, I was so desperate to feel better, I rarely turned down a “treatment protocol” tossed my way.  I have had peptide injections and been blood tested, stool tested, muscle tested, urine tested, saliva tested… I think you get the point.

After a few years of really feeling helpless and often wanting to die, I finally started implementing additional dietary changes.  You see, I had already been gluten free after my diagnosis with Hashimoto’s thyroid disease in 2008 and thought that my lifestyle was relatively healthy, at least compared to most people I knew.  But I kept digging. I looked at veganism, grain free, dairy free, macrobiotic, paleo, primal, and so on.

I decided that primal seemed like a good fit – after all, I had no dairy intolerance right? I had no gastro issues or tummy pains. I have always digested food well to my knowledge. No IBS or anything of that sort.  Yes, primal was my answer.  I could give up the few gluten free grains I still ate but still keep my beloved grass fed heavy cream and cheese.  THIS I could do.

But as the months lingered on, so did the brain swelling, vertigo, heart palps, migraines, emotional lability, and overall neurological deficits.  They would come in “flares” which lasted sometimes upwards of a month, keeping me homebound as I was too sick to even drive.  I was dying and iI knew it. I was scared and often helpless.  Why couldn’t anyone figure out what was wrong with me? Around that time I had even MORE testing done in terms of food sensitivities and I was urged to stop dairy instantly.  I knew it was time, despite my resistance. 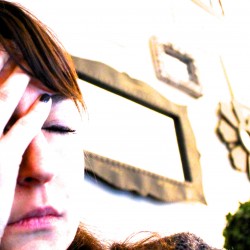 I believe what was happening in my body was a combination of many factors. Did I have Lyme? Sure, maybe. Lots of people do and never get this sick. Did I have a combination of leaky gut, other pathogens, and candida overgrowth? Yep, that’s what happens in the chronically ill by default from all the other things getting out of balance. Do I have poor methylation factors and a challenged detox system? You bet. I’m one of those “lucky” ones.

But one fact is certain: I am intolerant to casein.  VERY intolerant. I already knew I was intolerant to gluten but for some reason thought, or at least wished, that I could isolate that sensitivity. But the truth, for my body and many others, is that there is so much cross reactivity with gluten that it usually cannot be isolated as the only sacrifice made.  It was not until I gave up dairy in all forms that I began to finally see a gradual shift towards getting my life back.

Naturally it is important to note that everyone’s sensitivities can vary. I know quite a few people who can tolerate raw or grass fed dairy and feel great, but they touch a potato and get inflammation. I personally just can’t do dairy, regardless of the quality. I even have to be careful with ghee even though the casein and lactose have been cooked off.

Because of my sensitivities, I have been mindful of my children’s potential issues.  They have each been gluten free since the age of two and have done very well with the adaptation. However, I have two case studies here where that wasn’t enough.

To continue reading and to discover how dairy affected Jennifer’s children, please continue on to her blog, Predominantly Paleo  http://predominantlypaleo.com/quit-dairy-cant-ever-go-back/

And don’t forget to check out the special deal on her e-book! 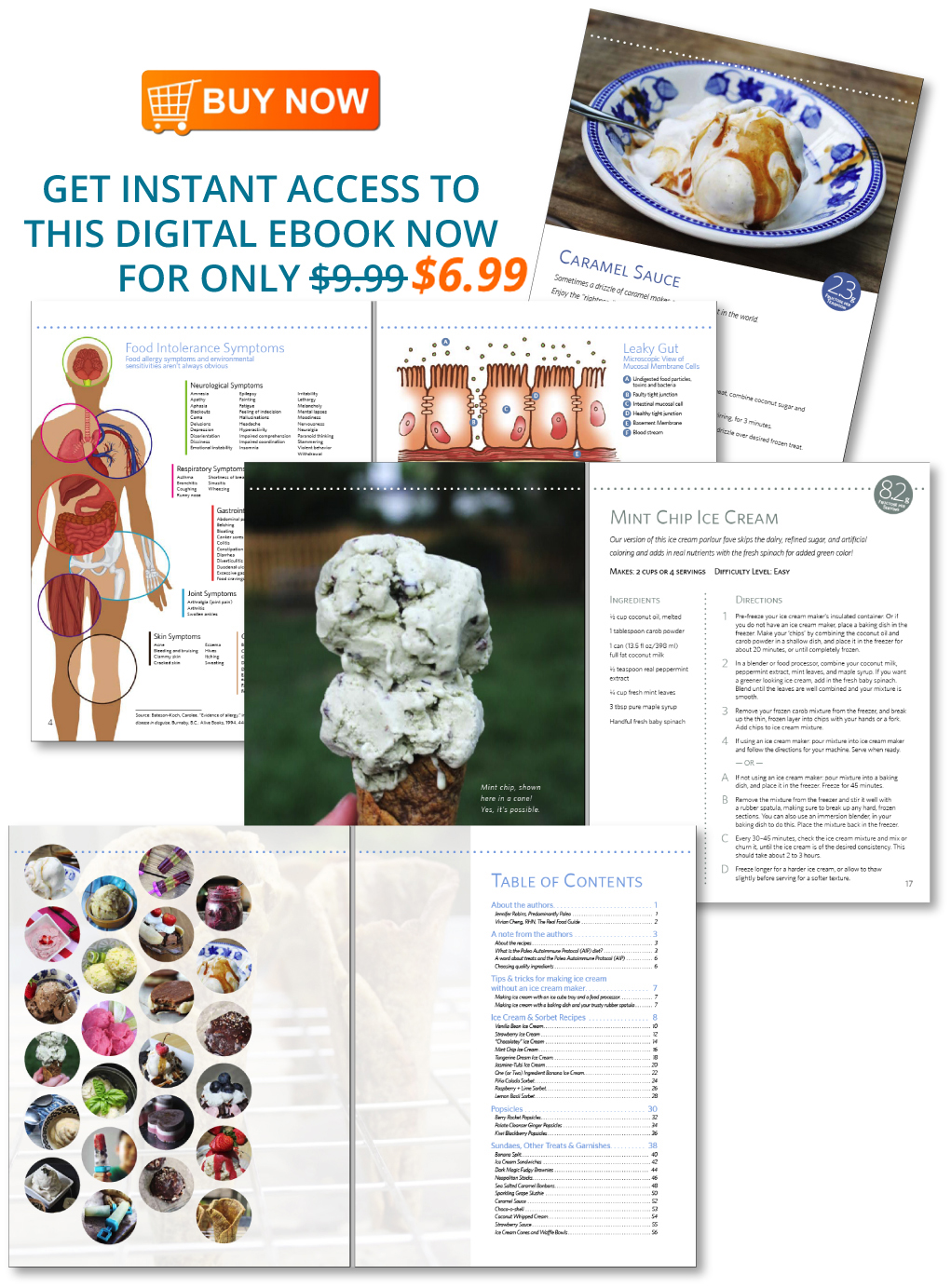 See the author in person!

Jennifer will be speaking locally on August 15 and 16 for the release of her new book, Down South Paleo. See the Eventbrite for the August 16 release event at Bon Vivant Cafe + Farm Market in Del Ray, Alexandria. 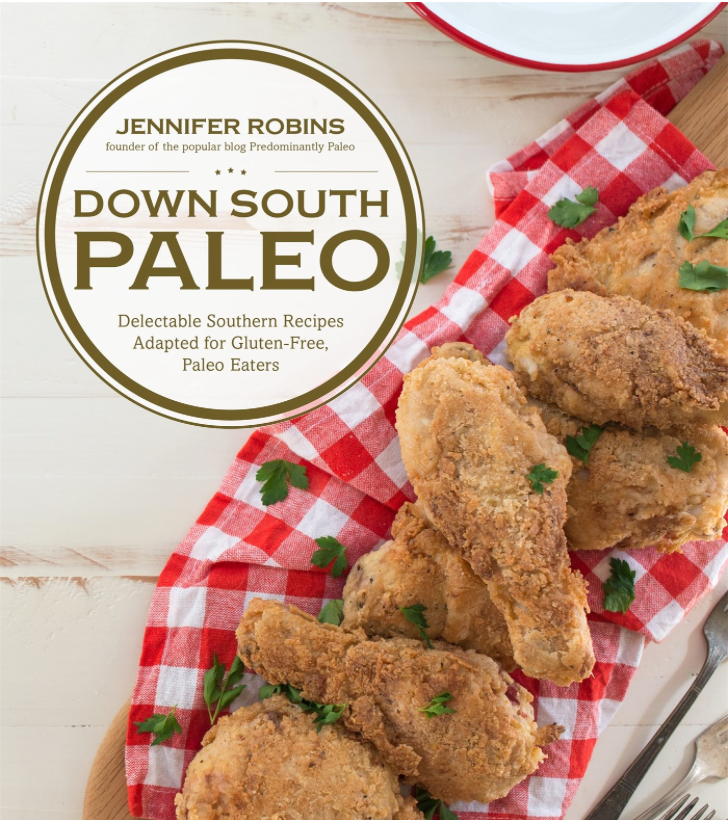 « How to celebrate a safe 4th of July
Moms Flock to U.S. Capitol for Climate Action Play-In »
Follow on Instagram
Tweets by @@MindfulHealthy