A YogaKids DVD was the first television I allowed my son some seven years ago.  Since then, he and his little sister have been to a handful of kids and family yoga classes, and a day of yoga camp. This summer, my daughter had a delightful yoga birthday party at which her older brother showed off his knowledge of poses and Sanskrit phrases. They are not without some yoga knowledge.

But truth be told, though I try to practice daily on my own, yoga has remained something of an extra rather than an integral part of my parenting. It’s always there in the background in theory, but in practice, when I’m working so hard just to stay well by cooking all the time and am also staying involved in volunteer efforts whose higher goal is health and well-being for families, I don’t always ooze groundedness at home. I never have, anywhere. This really is a lifetime journey.

Enter the first National Kids Yoga Conference conference this past weekend! As if it weren’t inspiring enough just to interview the organizers, I emerged from the conference in awe of the many benefits of yoga for children and bowled over by the numerous strategies out there to make yoga accessible to young ones. It was truly transformative. I hope and believe that my parenting – my life – will never be the same.

Of course, there were dozens of sessions I wasn’t able to attend because I am not five people simultaneously (though I often wish I were, but that’s not very yogic!) If I could, I’d write a piece on every speaker and every program and product. For now, here is an overview of my day at the conference.

The morning began with all 300-some attendees in the Convening Center at the George Washington University School for Public Health in its brand-new and light-filled building. The place was packed! Exhibitors lined the perimeter of the room and attendees filled the chairs to view the speaker and multiple screens which made the powerpoints and the opening video by Radiant Child Yoga founder Shakta Kaur Kalsa accessible to everyone. 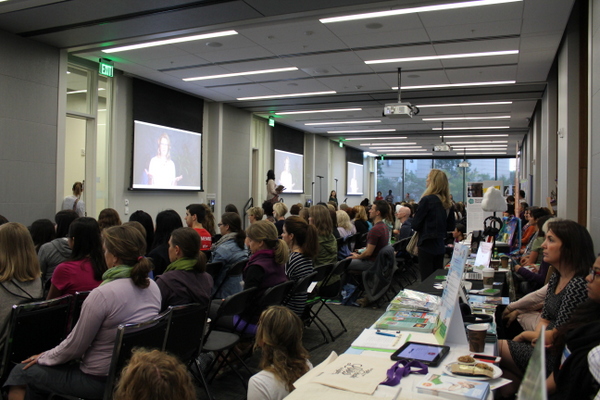 The room was nearly brought to tears by her video of a toddler singing “I am happy. I am good.” What if we all said that to ourselves every day? What if every child believed that with every fiber of her being?

After the opening words by Shakta and by conference organizers, Pleasance Silicki of lil omm yoga studio in Tenleytown and Michelle Kelsey Mitchell, co-founder of the non-profit organization YoKid, we then heard the inspiring story of Next Generation Yoga founder Jodi Komitor. Seventeen years ago, Jodi gave up everything stable in her life and quit her teaching job to build the first children’s yoga studio in the world, starting her work with children with special needs until she “realized we all have special needs.” Jodi said things took off only when she asked for help and called on us all to always co-create and collaborate. 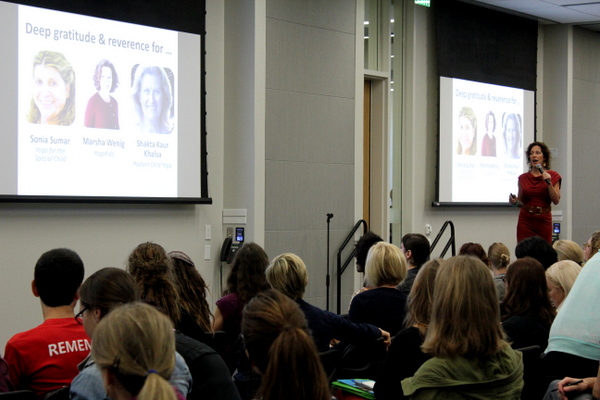 Then came Chelsea Roff’s moving account of how yoga saved her life. After her cousin committed suicide, Chelsea’s mother went into a downward spiral of depression and alcoholism. Chelsea briefly reconnected with her mother through a diet and then went on to pursue extreme dieting as a way to exercise control in an otherwise chaotic and painful life. 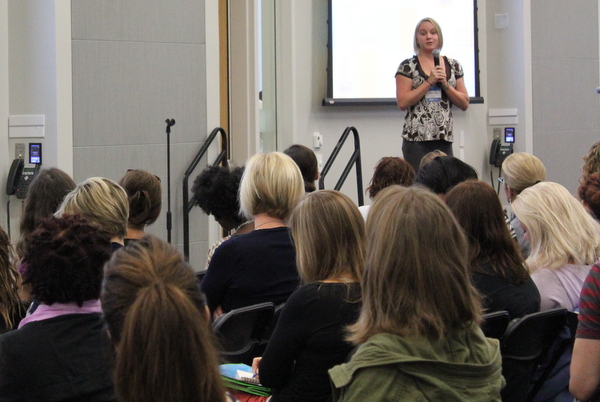 After her eating disorder led to a stroke that landed her in the hospital where she remained for 18 months, Chelsea found in yoga a sense of embodiment that helped her to heal and reclaim her life. She’s gone on to teach yoga in detention facilities where she’s encountered many other girls who with eating disorders. She went on to found Eat Breathe Thrive.

After these powerful morning keynotes, attendees dispersed to the various tracks for breakout sessions. It was hard to decide between sessions, there were so many great ones! During each of the five breakout sessions, there were two presentations in the Schools track as well as one in the Tools track for ways to incorporate yoga into family life as well as into classes, one in the Research track about what science and academia are saying about the benefits of yoga, and one in Business for studio owners and teachers.

In the beautiful and light-filled exercise room that housed the “Tools” track, I got to know a wonderful story about sitting with one’s anger.  Mother of three, Yoga Child founder, and author Gail Silver led us through her picture book Anh’s Anger and talked through strategies for using it with children. 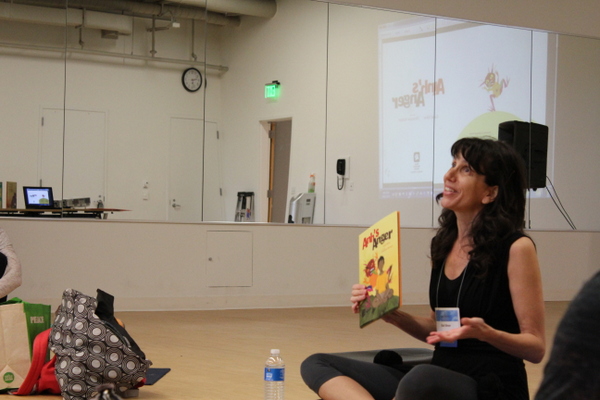 Key, Gail said, was not to introduce a book the way many a well-meaning parent might: “We’re going to read a book about a boy who gets angry and see if we can learn something from the way he deals with his anger.” Instead, she said, allow children to come to the story without preconceived notions. Asking what it’s like to be angry and if it’s okay to be angry – many children will say no – is enough to get them thinking. This and the rest of the discussion, practice, and presentation were so insightful and applicable to to numerous other conversations that could help children think about their feelings. 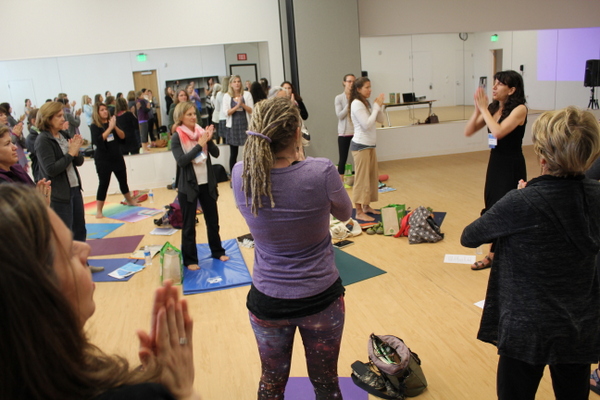 Next, Kira Willey, founder of Fireflies Musical Yoga for Kids, brought the “Tools” room into song and movement with an active presentation that explained the importance of the three As when using yoga with children: Atmosphere, Attitude, and Attention. “Never start by talking” she urged us and showed throughout her presentation the power of singing directions. 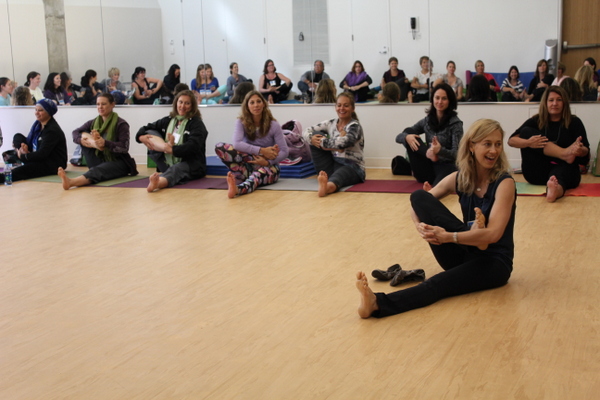 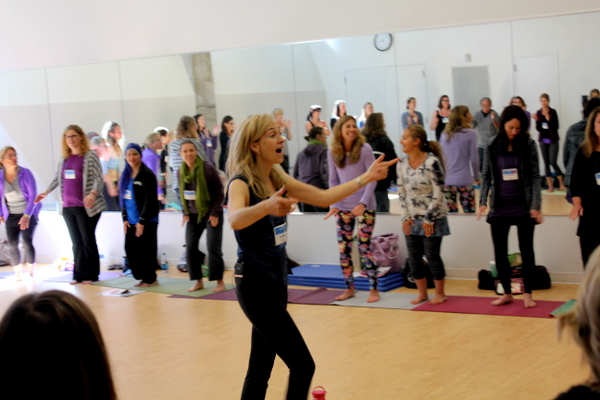 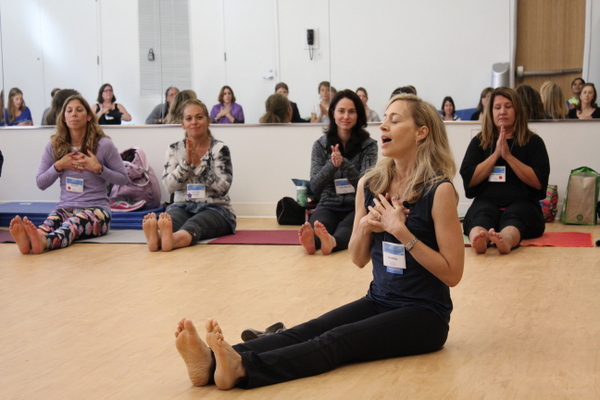 “We can build unity by singing together” the mother of three explained and demonstrated. Closing her presentation with a group sing of “Colors” (I’m a Rainbow Today), the whole room swayed with smiles, and at least a few tears of joy.

Back in the Convening Center, Sat Bir Khalsa of Harvard Medical School talked about the importance of funding research on the benefits of yoga. In order for yoga to be included in health care in widely in schools, we need an evidence base. 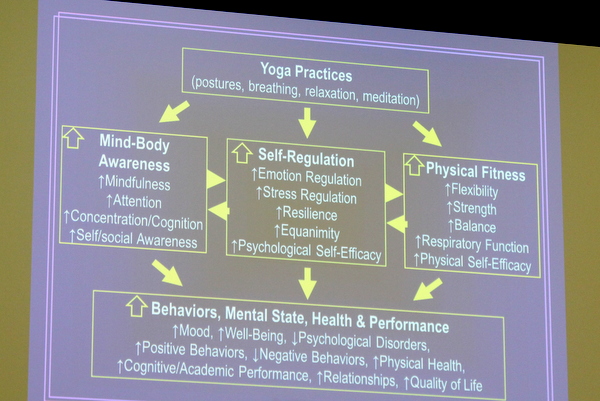 Khalsa’s talk was followed by a music jam with Bari Koral of the Bari Koral Family Rock Band. Her voice and melodies are like a big bouncing smile, and everyone wanted to nod along. 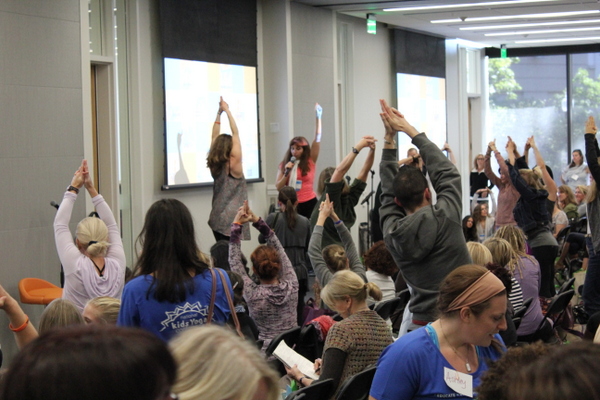 This pre-lunch keynote combination exemplified the amazing blend of theory and practice the conference managed to pull off throughout the day. All the presenters shared note-worthy information and observations but they also incorporated experience as a key component of their presentation.

In “Bully-Proofing Skills Using Yoga,” Dee Marie of Calming Kids talked about the breathing body and the emotional/mental body as a means to get children into their bodies. Breathing techniques, movement techniques and partner yoga set the stage for effective ways to deflate bullies and for children and teens to feel a connectedness that assists bystanders to difficult situations. Since her “Schools” track audience was in an auditorium, Dee had the perfect opportunity to demonstrate that yoga can be done anywhere: children do not have to take off shoes and roll out mats but can do it at their desks. 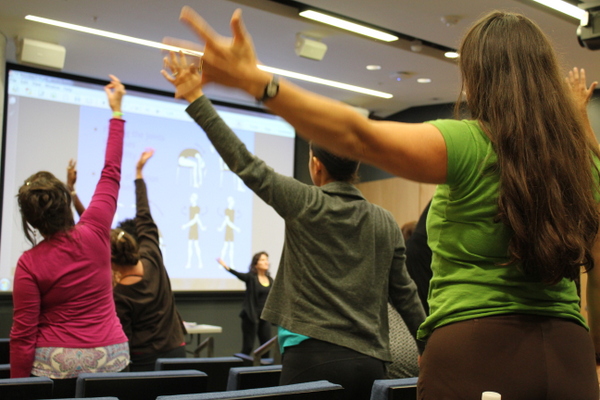 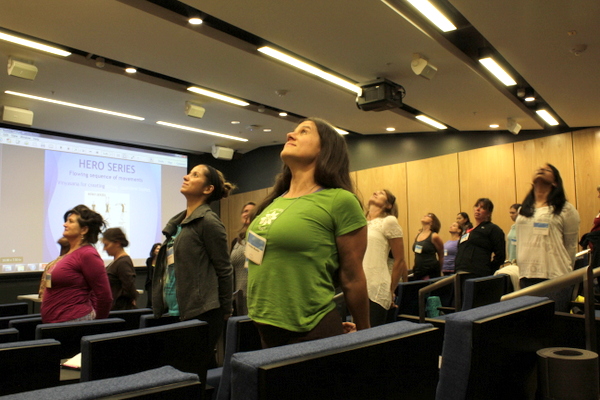 Back in the Tools track, Christyn Schroeder of KidPowerment Yoga and Checka Aniforario of Checka Yoga shared “Tools for Transitions.” Grounding work and breath work can help children focus. 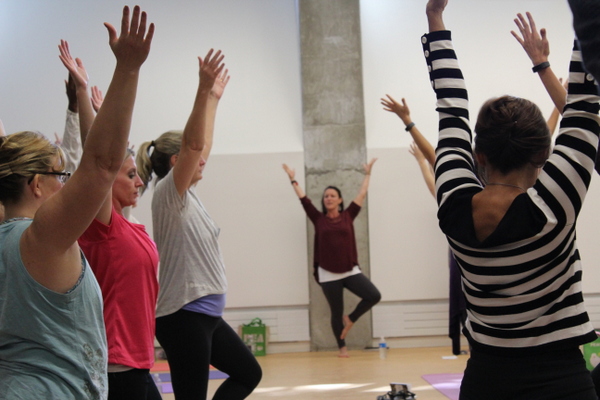 Acknowledging a child’s “big feelings” and showing volcano breath or inviting the child to “blow the color” of a feeling away can help her to calm. After sharing the intention to move toward rest, an inversion like downward-facing dog can cue the parasympathetic (calming) nervous system, especially if paired with singing a familiar song.

Many speakers spoke a lot about how yoga and related exercises can help children’s ability to self-regulate. Much discussion was had about brain balancing activities including crossing the midline, connecting the left and right sides through various movements. Many references were made to Brain Gym, including by the speakers in the final “Schools” track session I attended, “Movement and Mindfulness for Healthier Kids & Classrooms” with Leah Kalish and Wendy Piret of Move with Me Action Adventures. These two engaged the audience in several exercises that demonstrated the power of brain exercises to encourage calming, groundedness and ability to learn and perform tasks. 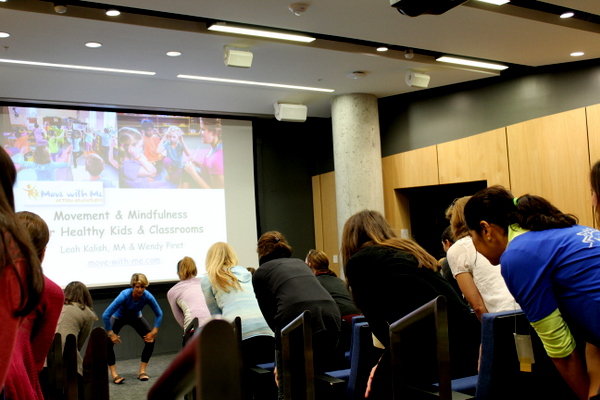 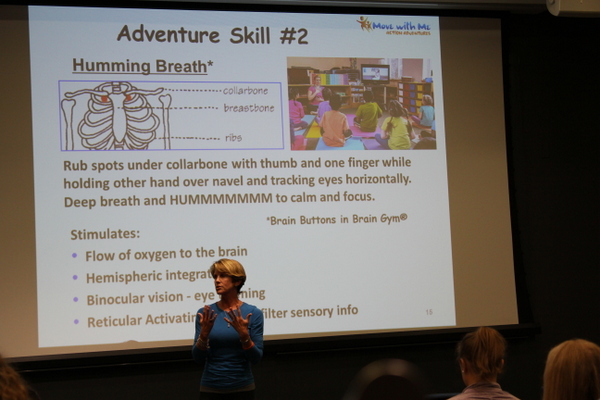 The final panel of the afternoon included the team from the Baltimore-based nonprofit organization Holistic Life Foundation along with Eddie Stern from Ashtanga New York  and the Sonima Foundation for Health and Wellness about their efforts to bring yoga to underserved populations. Many of the Holistic Life students don’t have the physical space in their homes to roll out a mat, so the organizers encourage them to think about yoga as a 24/7 mindset including holding the door open for someone or telling your mother you love her. In fact, a favorite quote from the conference was that we need to create “love zombies” to go out and spread the heart connection. 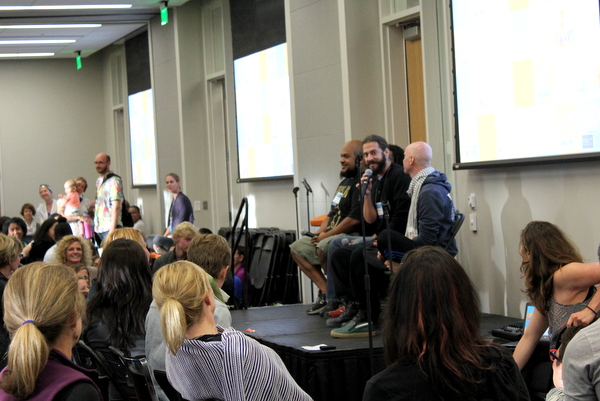 Holistic Life Foundation’s Ali Smith and Atman Smith shared success stories of yoga in neighborhoods that had experienced violence and of taking off the streets youth who otherwise would have engaged in activity that would hurt their communities (including dealing drugs) but instead are turning their “‘hoods back into neighborhoods.”

This closing discussion noted the need to increase diversity in the room; most of the conference attendees were women, and issues of race, size, class and sexual orientation were raised. The speakers proposed making the old paradigm of yoga being just for skinny white women become “obsolete by creating a new paradigm.” It seems they are doing just that by making the benefits of yoga accessible to youth who are going on to share it with their communities and to teach the next generation. The keynote closed with the words, “Love is the most powerful force.”

The conference concluded with gratitude from Pleasance and Michelle and finally with a yoga class led by Eddie Stern. 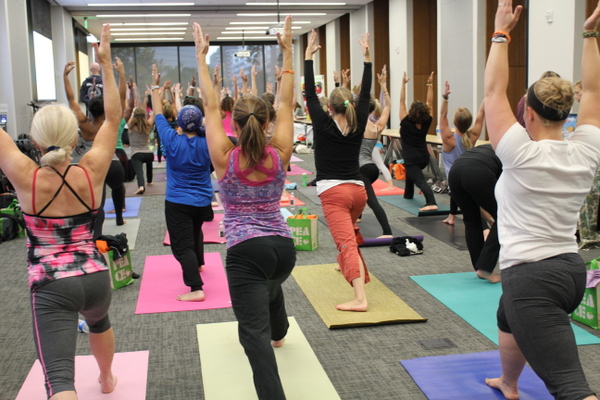 The organizers plan to make the conference an annual event, so look for information to come about next year. This year included a sold-out Teen Track, and they organizers would like to include a track for younger children if possible. Count me as one mama who would sign up her son and who is going to push her PTA to fund several teachers to attend.

I was so excited to see that a Virginia Preschool Initiative teacher from my children’s school attended and then to learn that her conference fee was paid for by the school system or the Early Childhood office. When I saw her on the playground yesterday, she told me she had already used three yoga songs from CDs she got at the conference. And then my daughter’s teacher told me she’d already heard about the conference from this enthusiastic attendee. Love zombies! This is how transformation happens!

Want to know more about children’s yoga? Check out our list of children’s yoga resources. It includes links to speaker websites, organizations, businesses, training programs and other resources mentioned by conference speakers.